You’ve heard the expression, “I’ve been there and got the T- shirt?” Well I’ve got the trousers as well; take a look at the photo of mini me above.

A few years ago I lost a lot of weight, I needed to I couldn’t even find a tie that would fit. Better still I’ve managed to maintain my target weight within a few pounds either way. I mentioned it when recently speaking at a dinner and was asked if there were any lessons to be learnt from my experience of deliberately losing 100 lbs (45Kgs) that we can all apply to every aspect of our working lives and life in general to achieve success.

Which reminded me of the time I had a clear out and I came across some old trousers and… they talked to me (for some reason that sounds so wrong on so many levels but let’s go with it). I say ‘talked’; they reminded me of four ways that I’ve noticed how some people behaved towards me when they found out I lost so much plump. There have been times I’ve been AMAZED at what they said and how they conducted themselves.

ONE) I wish I had cupcake every time someone said, “I couldn’t lose weight, I like my food too much.” WHAT!?!? What makes them think I don’t like my food? The fact is, I’ve INCREASED the number of foods I eat AND like; I love food and eat well.

It’s the same in work and life, sometimes we focus on the problems and on the things we can’t do instead of focussing on what we can do, on solutions and on making the most of the resources we have.

TWO) Some of my friends and colleagues, who know about my achievement, when we eat out socially suddenly change their eating habits and eat ‘healthily’. For some reason they feel guilty eating buns and pies in front of me. I would now like to make it quite clear I AM NOT A BUNAHOLIC. If I get a sniff of a bun or a pie I will not turn into some crazed animal and wrestle you to the ground to steal the food.

Nor will I run out of the room shouting at the top of my voice, ‘Unclean, unclean’.

I didn’t do this to impress anybody, nor do I feel superior having done it.

Always be you. I was always been accepted and loved by my family and friends before the health gain and as I am now. My guess is that the people who really matter will think the same about you.

THREE) I’ve been told numerous times of people (no names are ever mentioned) who were unhealthy and overweight and became fit and healthy people and once fit and healthy died young or developed cancer. The argument being there’s no point in doing the hard work to become healthy. I have some bad news for those of you who think like that. There are probably a 1000 times many more people who live unhealthily that die than the healthy ones.

The fact is that after all my hard work I could drop dead tomorrow (not a nice thought, but a fact). It’s also a fact that I could die of a long and lingering disease. Here’s another fact; what I have done is to drastically reduce the chances of those two things happening, I’ve also reduced the chances of developing many diseases associated with being overweight.

If you do anything, do it for yourself. I feel great NOW, I enjoy my life NOW. When I walk to the garden gate, I’m not out of breath. When I blink a dozen times I don’t feel like I need to have a rest.

FOUR) You wouldn’t believe how many people have shown concern that I now may no longer be funny. Why? Because… I’m thin?

I’m sorry, but ‘fat’ people do not have the monopoly on being jolly and funny. There are plenty of skinny, funny and happy people, probably more.

My audiences, when I speak at conferences and after dinner, will agree… I’m still funny.

At work and in life don’t buy into the beliefs of others. For example, if someone tells you diets don’t work or networking doesn’t work, they’re only saying that because they’re not good at dieting or networking. That doesn’t mean that you won’t have any success in doing it.

WOW!!! I got all that from one glance of my trousers.

You see, whatever we want to achieve in life all starts with what goes on between our ears. All the training in the world won’t help us to achieve anything if our head isn’t in the right place.

Until next time may your trousers give you the wisdom you need :) 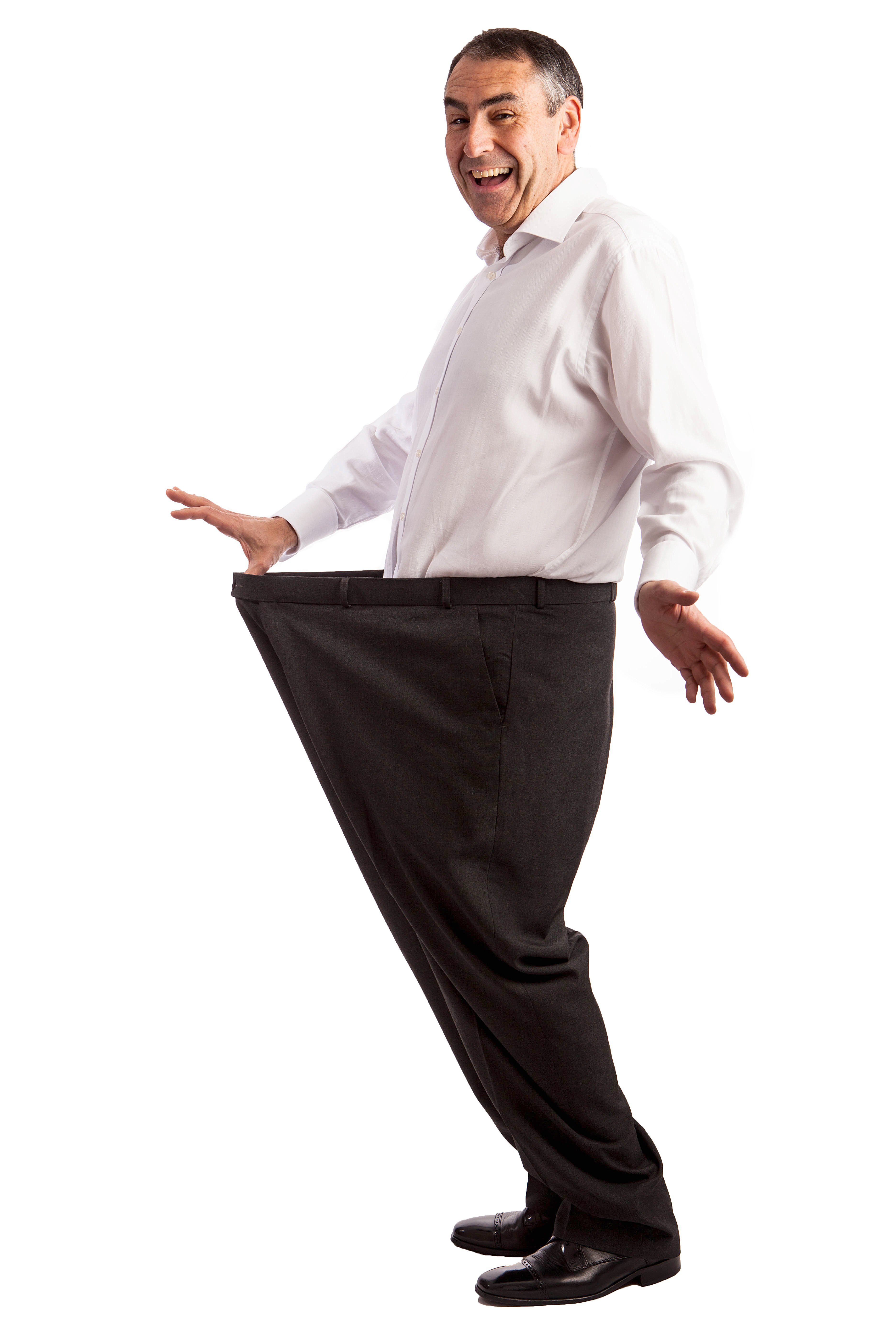 We use cookies to ensure that we give you the best experience on our website. If you continue to use this site we will assume that you are happy with it. Ok
Go to Top